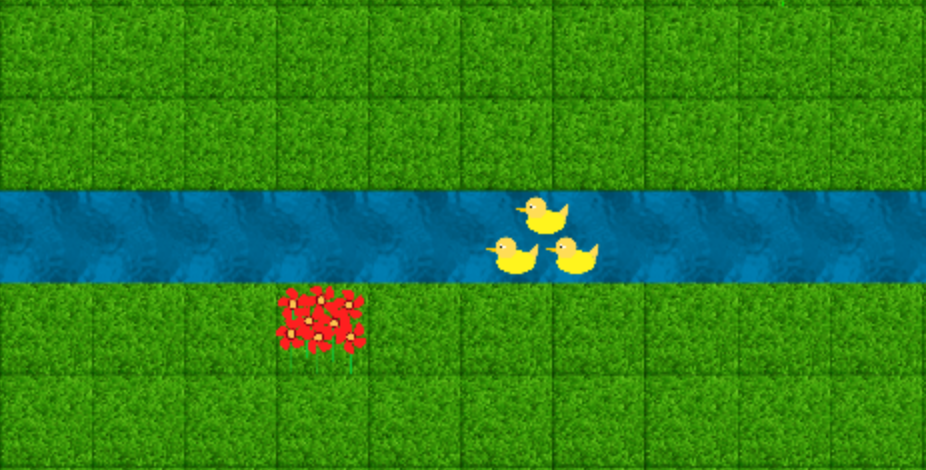 I am working on a brand new massively multiplayer browser game!

Three weeks ago, I decided it is finally time to put aside some of my other hobby projects and get to work on a game once again.

The game is called Paddlers, as in a paddling of ducks, and the story description is presented in this post.

Now, being the programming nerd that I am, I would love to jump right into the technical details and tell you all about the cool WebAssembly frontend that I am using or the microservice architecture in the backend. But instead, I will make this a series which covers the development process of the entire game and it will be better to start with a non-technical description of the game.

At least for this first post in the series, I will omit technical details entirely. Also, the game mechanics are only touched on the surface. For now, let us talk only about the most fundamental aspect of a good game: The story.

Let there be light

We play games because they are exciting, fascinating or even thrilling. So this is what I as a game creator should aim at.

To guide my first steps in that direction, I borrow some concepts from the literature. In fiction, six central elements are often listed as the key building blocks of a good story. Let us go through those for the game at hand.

The world of Paddlers, we shall name it Paddland, is inhabited by a variety of ducks. These ducks, who refer to themselves as Paddlers, are friendly and peaceful, but also a bit dull and naïve. They often stray through their life quite causelessly. Naturally, they often suffer from a lack of motivation to do anything at all.

On the contrary, when a duck comes across a leader it deems worthy, it will look up to it as an idol and become an enthusiastic and loyal follower. In a sense, the ducks are given a purpose in life by such a leader that tells them what to do since they are too narrow-minded to give purpose to themselves.

Then, there is the second kind of character. Some sort of gods, living in a supernatural layer beyond the duck’s reach. To influence the happenings inside of Paddland, they rely on their deputies which will be chosen among the Paddlers. They will act in the name of their leaders and spread their will.

The traits of these gods can vary substantially. Some of them care a lot about the well-being of the ducks in Paddland. Others, less so.

But they also have some things in common. For example, they are much more sophisticated than the casual Paddlers. They typically have their master plan in mind and will have no scruples to take advantage of the gullible Paddlers to fulfill it.

Paddland is a continental area with plenty of fruitful land and numerous streams stretching them. It is the perfect place for ducks to thrive in and there is, at least in theory, enough of everything for all ducks to coexist happily.

The technological age in which the Paddlers live is changing during the story of the game. Paddlers start out as farmers and gatherers but they will end up developing up to industrial technologies.

The gods help them to develop societies which in turn expands the influence of the respective god.

The different gods cooperate with and compete against each other. They always try to let their followers progress as fast and possible and they want to control as many of them as possible.

To reach their goals, they will follow choose different paths. Some will create a paradise for Paddlers which will attract many new ducks to come and stay. Other gods might find different ways to convince Paddlers to stay…

As you might have guessed already, the players will be the god-like spirits mentioned before. They can give orders to ducks which are loyal to them and they can communicate with other players. As a start, each player has one loyal follower to become his or her first deputy.

Each player has a global view on the entire map of Paddland from a high-level perspective. The actual happenings inside the world, however, can only be observed and influenced through loyal Paddlers.

As different gods will be competing against each other, there is a natural cause for external conflicts. They will try to entice away loyal followers from other gods and there will be strategic fights over territorial control.

The symbol of a story, or sometimes called theme, is conveyed to the story consumer in a more subconscious way than the plot. In my humble opinion, the symbol has a great influence on how we remember a story and how we judge it.

Looking at games, it might seem like the actual gameplay is everything that counts. But if I look back at games I have enjoyed, almost all of them have a great underlying story which features the first five elements of fiction. But what about this last one?

While there are certainly exceptions, I think many games, especially strategy games, fall short on this last aspect to make a good story. And I believe the player experience could benefit from games with more emphasis on the symbolic meaning of the story.

For this game, I hope that some good symbols will arise as the story develops. I do not intend to artificially put them in. But I suspect there will be a couple of my thoughts and opinions shining through.

But I will wrap the post up at this point, rather than describing what the symbol of Paddlers is supposed to be. If you one day play my game, you should hopefully be able to feel what the moral is in your perspective, much better than I could communicate it to you in words.